Friday, 27 of May, The Lord Mayor of Brisbane, Cr Graham Quirk, in conjunction with the Lord Mayor’s Multicultural Round Table hosted the fifth Lord Mayor’s Multicultural Business Dinner at Victoria Park Golf Club and Function Centre. Over the last four years, the Lord Mayor’s Multicultural Business Dinner has become one of the major events in Brisbane’s business sector. The Lord Mayor’s Multicultural Business Scholarship Program is a key project funded by the Round Table in partnership with Queensland University of Technology and Southbank Institute of Technology. From 2008 till 2011 sixty seven students have successfully been accepted into the program. These scholarships have provided and will continue to provide opportunities for new and emerging entrepreneurs in Brisbane’s multicultural community to access education and training in business development and management. More than 500 guests representing a wide range of businesses and government agencies attended this year’s Multicultural Business Dinner. Ladies in evening gowns, men in tuxedos, national costumes, masks… In this beautiful athmosphere, were announced winners of the “2011 Lord Mayor’s Multicultural Entrepreneur Awards’ that celebrates the contribution Brisbane’s multicultural business owners make to the community through their creativity, innovation and determination. To be considered for a Lord Mayor’s Multicultural Entrepreneur Award, nominees must have been born in a country other than Australia, be an Australian citizen or hold permanent residency, operate a business within the Brisbane City Council local government area and own all or part of the nominated business. The selection panel judges each Nominee on the criteria such as contribution to the Brisbane community, financial obstacles overcome, social obstacles overcome, hardship endured and ingenuity and creativeness in the marketplace In his speech, the Lord Mayor of Brisbane, Graham Quirk commended the high level of entries in this year’s Lord Mayor’s Multicultural Entrepreneur Awards noting that the high level of competition made it very difficult in selecting not only the finalists, but also the winner. After a lengthy discussion, the jury unanimously agreed to award three winners: Director of Australian Innovative Systems Elena Gosse; Mario Alferi of Mario at the Dining Room; and King of Cakes owner, Wolfgang Kelco. Elena and her daughters moved to Australia in 1994. Elena’s obvious language barrier meant that she could not engage in favorite profession. After completing a short English language course, followed by a business administration course, and then a Bachelor of Business, Elena was able to help husband, Kerry, run the family business. Within eight years, armed with knowledge obtained at the Queensland University of Technology and Australian Institute of Company Directors, Elena managed to establish a highly professional team, build a strong distribution channel, and bring the business to an international level. Since 2000, under the leadership of Elena and Kerry Gosse, the company has enjoyed much success both in Australia and abroad. Hard work and the ability to manage risks has helped Elena to not just make money, but also to build a powerful international brand that successfully trades with 52 countries including Russia. Since 2005, Elena has received several nominations and won prestigious business awards both in Australia and abroad. http://www.brisbane.qld.gov.au/about-council/economic-development/lord-mayors-multicultural-round-table/lord-mayors-multicultural-entrepreneur-awards/index.htm 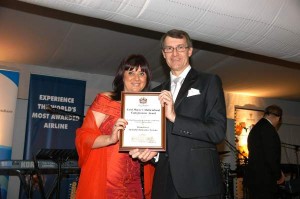 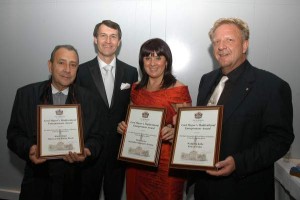 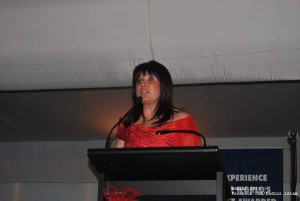 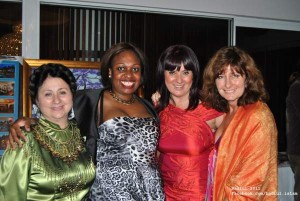 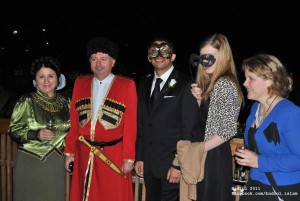 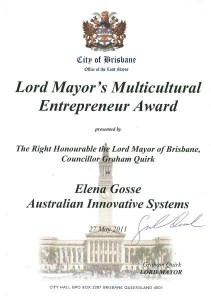