Built to protect and perform

With over 25 years of research and development, AIS’ Australian designed and manufactured technology delivers the ultimate in protection, performance and peace of mind.

AutoChlor® is a well-recognised, global brand of inline chlorine generators designed for salt-water, coastline and seawater pools with salinity levels between 4,000 - 35,000ppm

Contact us discuss how AutoChlor can work for your project. EcoLine® is a world first inline chlorine generator designed for low-salinity and competition swimming pools with TDS levels between 1,200ppm and 4,000 ppm.

AIS has redefined the future of freshwater swimming pool water disinfection, by enabling inline chlorine generation via electrolysis from a TDS level as low as 1,200 ppm.

EcoLine’s® innovation has been subject to national and international acclaim and recognised many times over with awards and accolades.

EcoLine® reduces the risk of salt-induced staining, degradation and corrosion on poolside paving, fixtures and fittings, especially anything made from rust-prone materials.

*TDS stands for total dissolved solids and represents the total concentration of dissolved substances in water. Dissolved substances can include minerals, salts, metals and organic matter and can originate from natural sources and as a result of human activities. PPM is the amount of TDS in a given volume of water, expressed in units of parts per million (ppm). 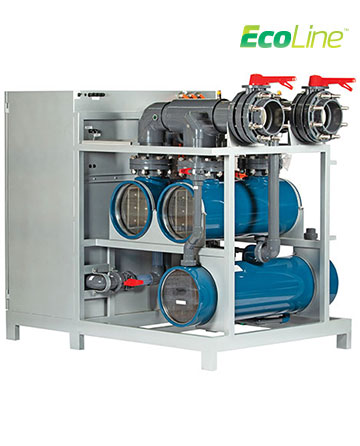