For most people, winning a top, Gold Award in the prestigious international Stevie Awards for Women in Business would be enough.  Not for Elena Gosse, CEO of Australian Innovative Systems (AIS) though.  The successful business woman has won a further three Silver Stevie Women in Business Awards and across a range of categories. 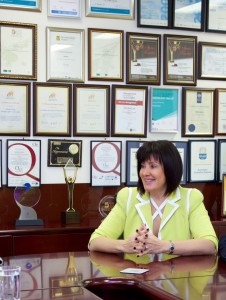 Following the November 14 awards ceremony which was held in New York City, Elena and AIS were awarded the Gold Stevie for Most Innovative Company of the Year-with more than 10 Employees; and three Silver Stevies for Woman of the Year – Industry; Female Entrepreneur of the Year in Asia, Australia or New Zealand andLifetime Achievement – Business.

The Stevie Awards for Women in Business form one of the world’s top honours for female entrepreneurs, executives, employees and the organisations they run.  The 2014 awards received more than 1,200 nominations across 90 categories and from 22 nations and territories. More than 160 executives worldwide participated in the judging process.