Elena Gosse describes herself as a “woman on a mission”. Having been named personally in the inaugural Queensland Government’s Domestic and Family Violence Prevention Honour Roll, as well as her company AIS Water also securing a listing from only 134 inductees statewide, she is certainly achieving her goals.

Elena, the CEO and co-owner of AIS Water, was named on the individual DVF Honour Roll for the work she personally does to raise money and awareness for services which protect women and children escaping from domestic and family violence.

AIS Water, which develops water disinfection systems for commercial and residential swimming pools was also named on the DVF Prevention Honour Roll in the Small Business list, recognising companies which are working to create the same awareness through fundraising, campaigns, or physically reaching out to those who may be experiencing DFV.

Elena has long been a supporter and advocate for Women’s Legal Service Queensland (WLSQ), which provides support and information for women and children to escape domestic and family violence. She has been raising funds for the not-for-profit since 2018, most notably through her involvement with its Dancing CEOs fundraising event. Since 2018, Elena has personally raised over $120,000 in donations which have gone directly to WLSQ.

In 2019, she was named Dancing CEOs’ All-Star Fundraising Champion raising an awe-inspiring $83,832; the highest individual fundraising in the history of the event. AIS Water is the platinum sponsor for 2021 Dancing CEOs.

Elena is also a finalist for the 2020 Australian and New Zealand Westfield Local Hero Award initiative and will donate her prize of $10,000 to WLSQ, should she be named the winner later this month (October).

“As a child I grew up in a home where domestic and family violence also lived and I witnessed the damage it can do, not just physically but emotionally,” Elena explained.

“I have overcome the trauma of domestic violence and while the memories are always there I know women and children in that situation can also not only escape, but thrive and live a meaningful life where they can succeed personally and professionally.

“My message is that everyone is worthy and everyone deserves to be treated with respect and dignity. If you are not receiving that at home, it is not a reflection on you, but the people inflicting the violence.

“I have lived a life where I developed a successful business and am now in a position to use my public profile to make a meaningful difference. My focus is very much on helping others to overcome violence, find self-belief and succeed.”

Queensland’s Minister for the Prevention of Domestic Violence, Di Farmer, said the inaugural DFV Prevention Honour Roll helps to highlight the need for awareness about the issue within the wider community and hopefully will encourage others to take a stand and do what they can.

“Domestic violence is everyone’s business, and through the Honour Roll, the Government aims to recognise those individuals and organisations who have made it theirs,” Ms Farmer said.

“The Honour Roll is about celebrating individuals and organisations taking small steps to end domestic violence as well as those with significant achievements.

“Inductees cover a broad spectrum of Queenslanders and Queensland organisations making a difference for people impacted by domestic and family violence in their communities.

“The Honour Roll recognises Queenslanders walking the talk in the prevention of domestic and family violence in their communities and businesses.” Elena is passionate about continuing to use her high public profile to raise funds for WLSQ and help others who are working to be free of domestic and family violence. She has created a website – elenagosse.com.au – with information about who she is, the work she does and how to donate to WLSQ. 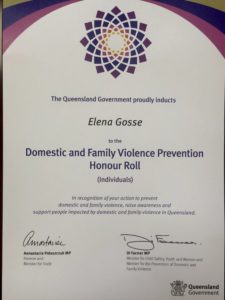 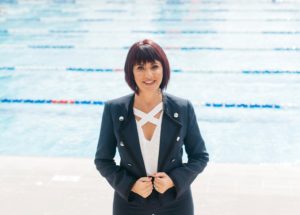 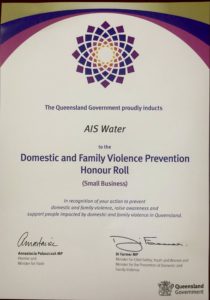