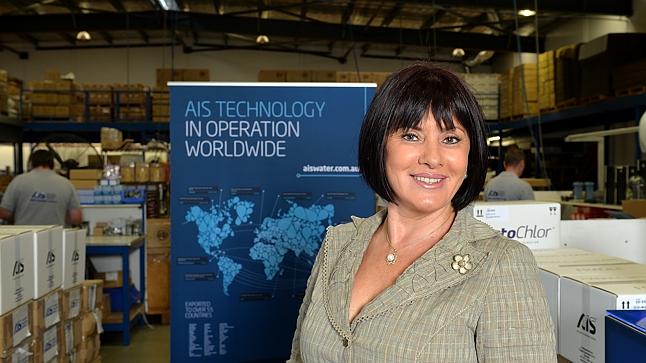 Homeowners in Australia are more likely to own pools than anywhere else in the world and until now they’ve had two basic options for water treatment: chlorine or salt.

Either choice involves painful trade-offs: chlorinated water is harsh on skin and eyes and hair, but salt water can corrode and rust other parts of the pool, and is not suitable for competitive swimming because it affects race times. The holy grail is freshwater but the options are limited and often don’t meet Australian standards.

But Australian Innovative Systems has made a breakthrough that could solve the dilemma and has helped the Brisbane-based company rank 23rd on the BRW Most Innovative Companies list for 2015.

AIS is behind EcoLine, innovative technology that disinfects freshwater using electrolysis. It can disinfect water with total dissolved solids levels as low as 1,200 parts per million – technically freshwater – rather than the standard 5,000ppm required by salt water chlorinators.

The company first made the product available for commercial pools in 2009 and released a residential version earlier this year.

AIS chief executive Elena Gosse says she knew there was demand for a residential version of EcoLine but it took “a long five years” to get the technology to work on a smaller scale.

“There was a lot of research, a lot of testing, a lot of failures, and finally we got it,” Gosse says. “There are a lot of people in the market who’ll tell you they have this or that, but in reality this is the only system that is currently available [that works at this level of salinity]. We needed to know exactly what the market needs, what features they need, not just that we develop a system and you take what we’ve created. We wanted to get it right. We built three or four prototypes and sent them for testing … and listened to feedback from our distributors. We launched in May and have 500 orders so far.”

Australia has the highest pool ownership per capita in the world, with more than 1.2 million private pools, according to the Swimming Pool & Spa Alliance of Australia. AIS also exports to 55 countries around the world and Gosse says the Middle East has particularly high demand for freshwater pools.

Yet EcoLine was just one of three new products AIS launched in 2015. The others include the AutoChlor Midi series for medium-sized pools, such as those owned by private swim schools, and an entry-level option called Chrome.

AIS recently went through a major rebranding and marketing exercise. Previously the company would manufacture products for third parties that would brand the systems as their own. Now AIS brands its own products and the company found this boosted staff morale because it meant their work was recognised.

AIS does not employ sales people because Gosse believes it would distract the company from its core strengths of research and development and manufacturing. However, she says AIS keeps close to customers and ensures product development fits market demand by talking to distributors and exhibiting at trade shows.

Gosse says AIS employs 60 people in Brisbane and nurtures a culture of innovation through leadership, continuous education and diversity.

“Innovation is part of our DNA – we are all greedy for a challenge and all greedy for innovation” Gosse says. “We’ve got an innovation line for the next 10 years but don’t have enough time to do it all. Having a diverse workforce is essential because everyone brings something on board something different. We’ve got people from 14 different nationalities and different walks of life, we’ve got 40 per cent of the workforce are women, we’ve brought back mature-age workers, we’ve got people with disabilities. It’s a great workplace.”

Gosse is herself from Russia and emigrated to Australia in 1994. Her husband, also an immigrant, originally bought the business in 1992 when it was just three employees but is now semi-retired.

Gosse was also motivated to help solve the problem of pool chlorination because her daughter used to be a competitive swimmer. She would come back from the pool not just with red eyes but often with asthma too, compounded by her cerebral palsy.

AIS is a partner of Swim Australia and a sponsor for Swim Disability.

Find this article at http://www.brw.com.au/p/lists/50-most-innovative-companies/2015/fresh_idea_for_pool_water_from_australian_D2wY05xPTzeuwInUX5nnaL