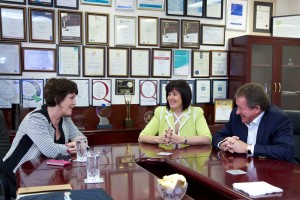 The Minister personally inspected AIS’ innovative, Queensland designed and manufactured water chlorination systems, three of which have just been installed at the Gold Coast Aquatic Centre (GCAC) – one of the aquatic venues for the 2014 Pan Pacific Swimming Championships and the Gold Coast 2018 Commonwealth Games.

Ms Stuckey said that she was pleased that a local company such as AIS was producing technology of such a world class standard. The company, which has been in business for over 20 years is 100% Queensland owned and operated and employs over 60 staff.

“This is a perfect example of innovative, locally designed and manufactured technology holding its own on the world stage, Ms Stuckey said.

“AIS has exported its water disinfection technology to over 55 countries worldwide. It is wonderful that the Gold Coast Aquatic Centre has been able to source what it requires less than an hours’ drive away.” 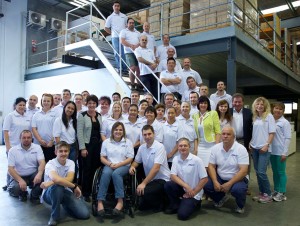 AIS CEO, Ms Gosse said that the company was honoured to have its technology specified for the GAC project by highly respected aquatic engineer, Paul Stevenson of Stevenson + Associates. For the pools that the AIS technology will be operating in, the GAC can bid farewell to transporting, storing and dosing chlorine.

“One of the major benefits of our water disinfection systems is that chlorine is produced automatically, onsite and inline via a process known as electrolysis. This means that commercial facilities can stop the endless and hazardous cycle of chlorine transportation, storage and dosing.

“Our systems are in use in many municipal pools, hotel and resort pools and water parks in Australia and overseas, Elena said.

“As well as the obvious occupational health and safety benefits, our systems help to reduce chloramines which are formed when ‘active chlorine’ in the pool water reacts with contamination in the pool such as urine, sweat or other body secretions.

“This reaction causes volatile chloramines to become airborne and create that terrible ‘chlorine smell’ that can sometimes affect the eyes, skin and breathing.

“What most people don’t realise is that swimmers are actually smelling chloramines rather than chlorine and strong chloramine levels could be a sign that the level of disinfection may be compromised.

“AIS technology takes the guess work out of the equation and makes maintaining a clean and safe pool environment easy.”

“I applaud award-winning companies such as AIS who are researching, developing and manufacturing world class products in our own back yard, Ms Stuckey said.

“By supporting businesses such as these we are all helping to create jobs and wealth for our country.” 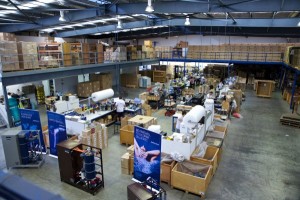